“Pick whatever you want, and get involved. These are all deep-rooted problems requiring lots of intellectual and monetary bandwidth. Trying to solve them, one step at a time, is an obligation for everyone.”

Rishi Pardal traces his passion for community service to a temporary stay in a village in his native India, where he queued up daily with local residents to draw water from a well with a hand-pump.

“As part of my job at my previous company, we had to live in a rural area for six to eight weeks,” he explains. “In these villages, there was no electricity, sanitation, or running water. People relied on these pumps for cooking, washing, everything. And it really struck home with me, how the basic infrastructure we take for granted in the city doesn’t exist in rural areas, and how that has a huge effect on peoples’ lives. It was as much of an awakening for me to go from the city to the village as for someone in the west to see what it’s like to live in a developing country.”

Rishi took two things away from his experience: a deep belief that “we have to give something back,” and an understanding of the importance of infrastructure to education, economic development, and quality of life. 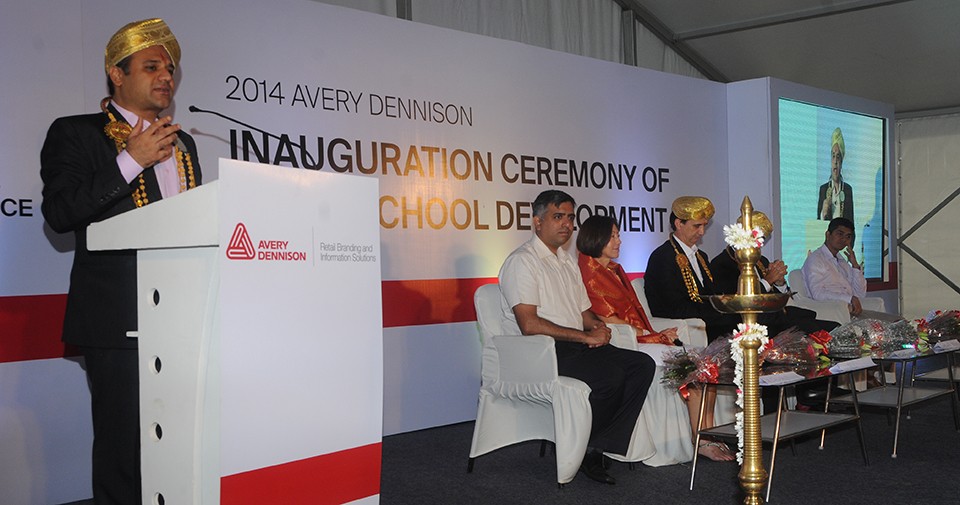 When Rishi returned to his life in the city, he promptly joined Roundtable India, a volunteer organization for professional men under 40 that matches philanthropic contributions with government grants to fund infrastructure for schools across rural India. The organization’s overhead is covered by member dues, so that 100 percent of the philanthropic gifts it secures goes to building schools.

“Roundtable India’s motto is “freedom through education,” says Rishi. “The idea being that, while India won independence in 1947, real independence and freedom only come when people are educated. And it’s true - I really saw the power of the schools we built.” (In 2014, the Avery Dennison Foundation (ADF) helped support Roundtable India with a $40,000 grant to add classrooms and toilet facilities at a rural school outside Bangalore.) Once he aged out of Roundtable India, Rishi stayed engaged with his community by mentoring young people.

As part of his role as global vice president and general manager for apparel solutions, Rishi helps lead Avery Dennison’s initiatives on sustainability and diversity and  inclusion. He also sits on the board of the Avery Dennison Foundation, where he advises on how to channel grants for maximum impact.

Leading 16,000+ employees in 14 different countries for a company that prizes community service, Rishi sees encouraging volunteerism as an important part of his job. Last year, CEO Mitch Butier presented him with the company’s Leader of the Year award, praising Rishi for “consistently doing what is right for our company, our employees, and our communities, and making it unmistakably clear that everyone on his team is to do the same.”

“As a leader, you have to be an evangelist,” Rishi observes. “For example, I recently went to Honduras and saw the women’s empowerment work being facilitated by ADF’s grantee World Vision. I didn’t need to do that, but you lead by example by proactively putting community engagement on the agenda.

“The other thing a leader must do,” he continued, “is to ‘walk the talk’ and create space for people to participate. If you say you want people to engage, but don’t give them the time off or the support to do it, it means little. Focusing on the narrow economic view, or worrying about the short-term effects of volunteerism on productivity, doesn’t get you very far.”

What advice does he have for anyone who is considering community service but hasn’t quite made the commitment?

“Know that the satisfaction and peace of mind you’re going to get will more than offset any investment of time and money,” he said. “Also, it’s easy to get stuck on choosing the issue you want to help with. Should it be education? Sustainability? Women’s empowerment? The answer is: pick something and get involved. These are all deep-rooted problems requiring lots of intellectual and monetary bandwidth. Trying to solve them, one step at a time, is an obligation for everyone.

“However you contribute,” he says, “you are going to make a difference.”

Connecting and paying it forward: LGM's Hassan H. Rmaile on the importance of networks