"A priority he stresses for all employees is the giving of time and resources to local nonprofits."

Anil Sharma knows exactly where his belief in giving comes from.

“It’s from my dad,” he says. “He was an executive like me, but he came from rural India where he saw early that some people had access to opportunities and basic material things, and some people didn’t. He would always say he wanted to go back and run a school there. And when he retired, that’s what he did.”

The school served children of migrant laborers, providing not only education, but also regular meals and a sense of belonging. Anil’s father paid for it all.

“It didn’t make sense to me as a child,” says Anil. “Why would my dad want to give up everything he built to go back and run a school? But as I got older and saw what we had versus what kids in the village had, I began to understand. And it planted the seed of wanting to give back, a deep desire to want to do something.”

Today, Anil has planted that seed in his own children by taking them to visit the school his father started. He has also made giving a cornerstone of his leadership at Avery Dennison.

As vice president and general manager of Asia Pacific for the company’s Label and Graphic Materials business, Anil oversees operations in dozens of countries on three continents. A priority he stresses for all employees is the giving of time and resources to local nonprofits.

“It’s absolutely essential,” he says. “It’s essential for any business to contribute to its local community, and it’s also essential to give employees the opportunity to express themselves in ways that are more fulfilling than just doing work.”

Here, too, Anil speaks from experience. The lessons he learned from his father were reinforced when he trained as a manager with Unilever in India in the 1990s. Many of the company’s factories were in poor, rural areas, and the company required its trainees to live in a village for six weeks and share in the daily experiences of the locals. Anil and his fellow trainees woke each morning at 4 a.m. to teach dairy farmers how to dig wells, improve milk yields, and make other improvements to their lives. They lived as the villagers did, which included bathing at the village well without privacy. The program, Anil says now, was a way of giving the team a sense of purpose.

“By the time you left, you were a changed person,” he says. “I measured those six weeks not as a stint in my training program, but by how much I made a difference.”

After a few more career stops, Anil arrived at Avery Dennison, where he was pleased to find a culture of giving that he now says has deepened over his decade with the company. One measure? The increased number of teams stepping up to volunteer.

“Now they realize volunteering is not just OK, it’s encouraged,” he says.

Anil credits The Avery Dennison Foundation’s volunteerism-oriented approach to giving as a driver of that shift. It’s one reason he serves on the Foundation's board of trustees. 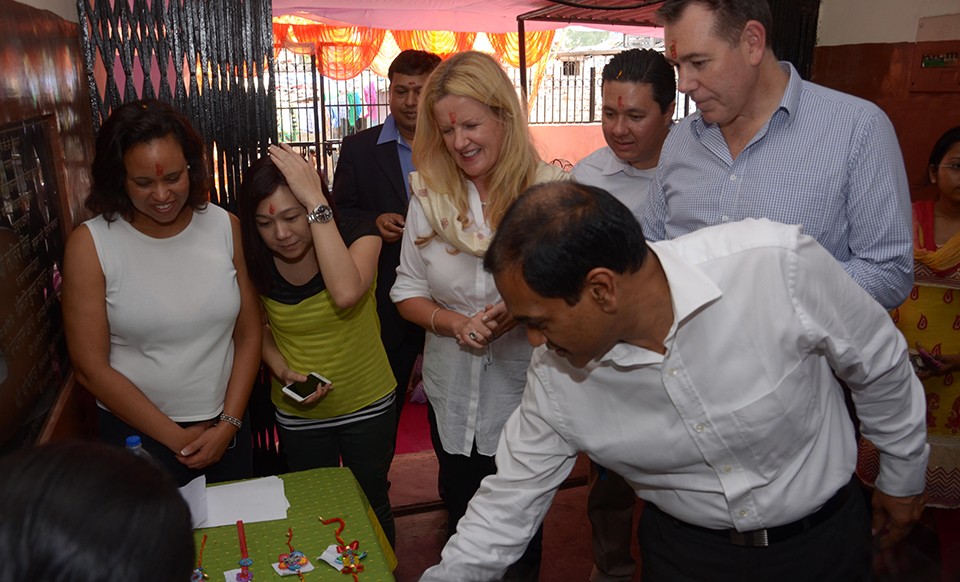 “It’s completely empowering for employees to have access to Foundation funds—to have a voice in where funds go, and then also be able to connect directly with the organizations and people who receive them,” he says. “Ultimately, it’s not about the dollars and cents. It’s about connecting with the community.”

Anil promotes giving in his town halls and other communications. Community engagement is also part of his region’s OGSM—the objectives, goals, strategies, and measures by which teams and individuals gauge their performance. “It’s a conscious part of our strategy,” Anil says.

The strategy is paying off in a variety of community engagement projects. A Melbourne team is working to relieve homlessness. Employees in Indonesia have planted mangroves. Volunteers in South Africa have provided technical education to local children. And in India, employees are contributing to several underserved communities through various programs.

All of it, says Anil, is to the mutual benefit of communities, employees, and Avery Dennison as a whole.

“As a company, you can’t just operate in a community for yourself,” he says, with conviction rooted in the village he visited with his father long ago. “You have to give as much as you’re getting. It has to be win-win.”