"Dad was a true innovator, and he made several inventions during his tenure at Fasson." 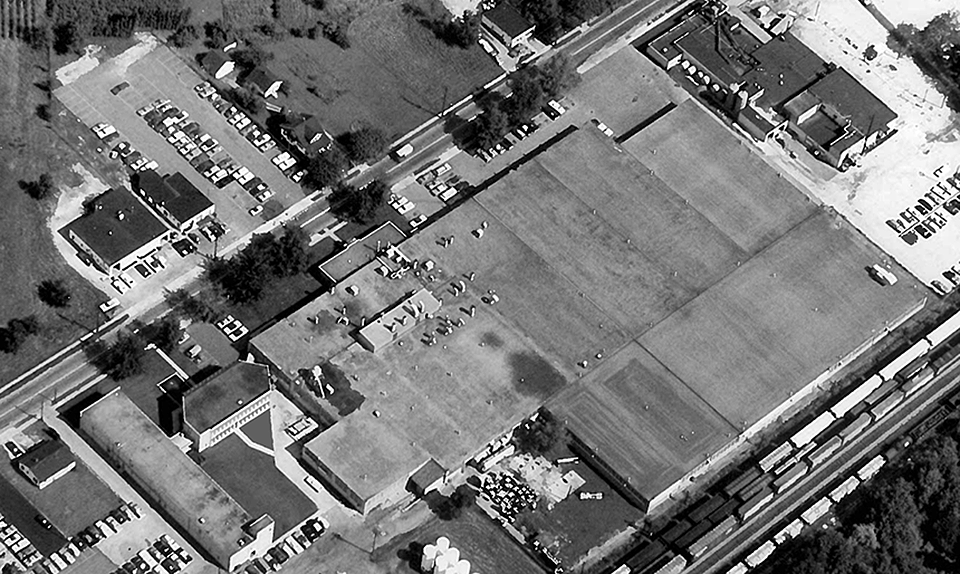 Aerial photo of Fasson’s Chester Street plant in Painesville, Ohio circa 1970s. Photo from the estate of John Kmetz.

Since Stanton “Stan” Avery founded Avery Adhesives in downtown Los Angeles in 1935, our company has been committed to serving as a force for good in the communities where our employees live and work. This mantra has enabled our team to leave a lasting impact on hundreds of communities worldwide for more than 85 years. Our values and guiding principles would be nothing, however, without the dedication of the employees who embody them.

We’re taking a look at the life and career of one such employee, John Kmetz, Avery Dennsion engineer from 1957 to 1999. Our sincere thanks to his son, Tim Kmetz, a former Avery Dennison employee, for reaching out to share his father’s story and a wonderful collection of Avery Dennison memorabilia.

Tim Kmetz: Everyone who knew him loved my dad. He would give you the shirt off his back if you needed it. He was a true storyteller at heart. He had jokes for every occasion, and a deep baritone voice. A lot of people told him he should be on the radio. He would always joke that he didn’t have the looks for TV.

He was born and raised in Painesville, Ohio, and maintained a reputation throughout the community for his strong work ethic; something he instilled in me from a young age. 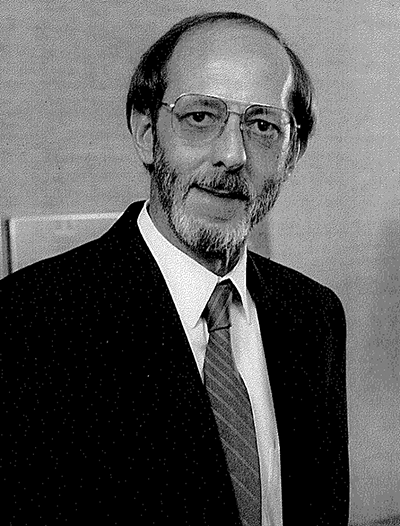 Fasson, a brief history – In 1952, the patent for Avery Adhesive Label Corporation’s self-adhesive label expired. What seemed catastrophic at the time turned out to be advantageous as it brought new companies into the pressure-sensitive label field, thereby creating opportunity for competition for the Avery Labels side of the business and growth for the company overall. These new companies broadened the label materials industry far more than a single company could. In addition, the competing label makers would become a highly profitable market for Avery’s base materials, which were served by a new division called the Avery Paper Company, later called Fasson. The Fasson name, chosen to carry the suggestion of “fasten on” or “fast on,” while long ago retired as a division or company name, is still recognized in the industry and has a place of honor in our Label and Packaging Materials product portfolio. 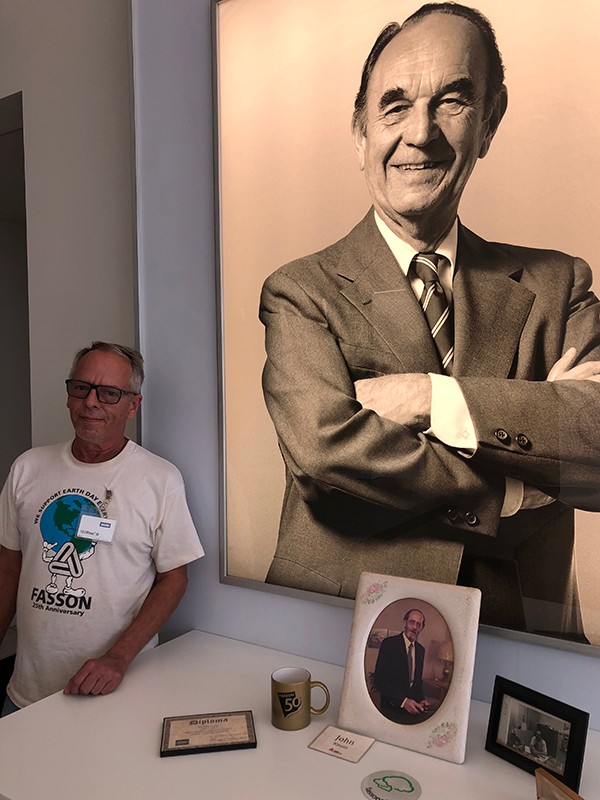 AD: John began his career with Avery Dennison at the Fasson plant in Painesville, Ohio. What memories do you have of living in northeast Ohio or your father’s work there?

TK: Dad left his job at Fisher Bodyshop in 1957 to join Avery Dennison’s Fasson plant as Avery employee #34. In the early days of his career, I would often accompany him to the plant on Sundays after church. We would go through the facility together reading the gauges and checking the clocks on the machines.

I think the appeal of Fasson was that it operated like a family. The team would regularly hold get-togethers and holiday parties, and employees’ family members were always welcome. I had the privilege of meeting many company leaders including Avery Dennison’s Founder, Stan Avery. To this day, many of the Fasson retirees still get together to reminisce about their time with the company.

AD: We know that John was a gifted engineer whose innovations set the stage for many of the products that we continue to use today. What can you tell us about his work at Fasson?

TK: Dad was a true innovator, and he made several inventions during his tenure at Fasson. I can’t count the number of sheer testers and splice tables he made, and I would often be recruited to help with assembly.

He also created a machine he called the “nitpicker.” Historically, the production process in the facility involved rolling paper through silicon and then scraping the excess away. This created a lot of hazardous static, and the excess silicon was collected in an open pan that had to be monitored. The “nitpicker” adjusted the process to contain the silicon, creating more efficient cleanup and less waste.

His true speciality, though, was in paper release technology. He knew everything about glue stretch, and backing paper. This ultimately enabled him to create a special type of glue that didn’t change color or lose its adhesive properties due to temperature fluctuation. This paved the way for the self-adhesive postage stamp used around the world today.

Putting our Stamp on the U.S. Postal System
Avery Dennison developed the world’s first peel-and-stick postage stamp in Pasadena, California in 1974. It was a holiday stamp that cost 10 cents and read “Peace on Earth.” The concept “stuck” and was ultimately reconfigured and relaunched in 1989, revolutionizing the U.S. postal system. After more than 20 years of successful production, Avery Dennison divested of the postage stamp business in 2013 as part of its sale of its Office and Consumer Products and Designed and Engineered Solutions divisions.

AD: In addition to his role as an innovator, John also left his mark on the community by developing Fassonation Park as a recreational space in Painesville, Ohio, for employees and their families. How did that come about?

TK: Dad could see the potential of having such a space for company employees, and the value it could bring in terms of morale and teamwork. He always had vision. That was one of his greatest gifts. Dad knew the owner of the park, and we had camped there a few times, so it was familiar territory. He worked with company leadership to negotiate the purchase, then formed the Fassonation Park Committee (FPC) to develop it into the recreational space we know today.

As Chairman of the FPC, Dad regularly embodied the company’s values of volunteerism and community service. Each fall, he oversaw the company’s budget request and approval process for maintenance and improvements. The following spring, he would encourage employees to participate in weekly work “parties” at the park to accomplish as much construction as possible with non-professional help. I helped by mowing the grass for years. Dad and I also constructed the tennis courts, constantly wetting them down to make sure rain water wouldn’t pool. They were exceptionally level by the time we were finished, and Dad was always proud of that.

AD: It’s clear that Fassonation Park was an important part of the company culture for employees. What do you think it meant for their families and members of the community?

TK: Fassonation Park played an essential role in my childhood, and I’m sure that was its intention. Dad’s team spent three months and nearly 200 hours constructing the Tot Lot playground so that employees could bring their young children to company events. As some of the kids grew a bit older, we constructed a treehouse that could only be accessed by a rope bridge. Whether we were holding dances or picnics, the park served as a gathering place for the entire Fasson family. 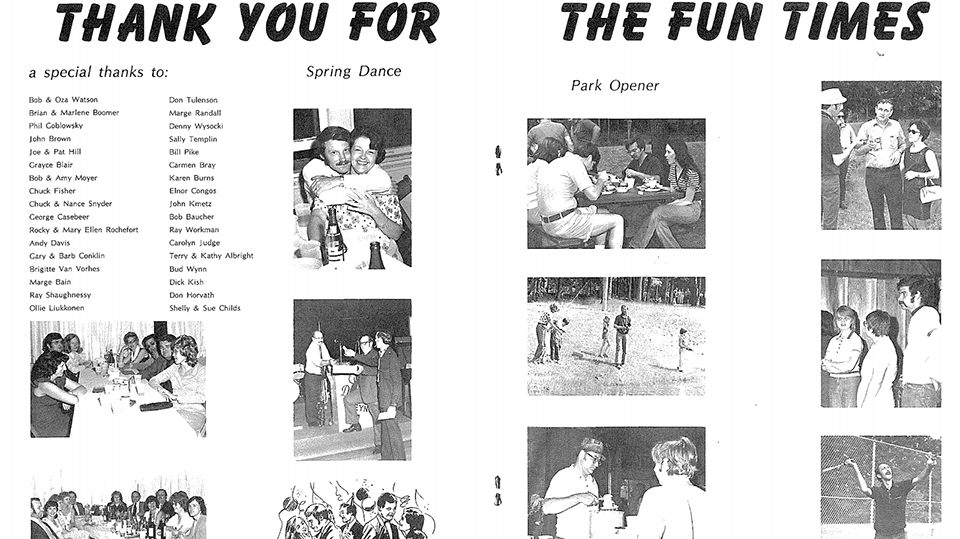 An internal newsletter recapping a successful summer at Fassonation Park.

Peachtree City, Georgia Fasson plant circa 1976-77. Photo from the estate of John Kmetz.

AD: In 1976, John moved to Peachtree City, Georgia to assist with the creation of a new Fasson manufacturing site. What was the motivation behind that move?

TK: I’m sure it was a difficult decision to leave Ohio and the Fasson family after nearly 20 years, but I think the opportunity was ultimately too tempting to pass up. My dad always embraced a challenge, and I think there was a certain allure to the possibility of what could be achieved in Georgia.

His instincts were correct, as usual. The team hit the ground running and the Peachtree City operations continue to play a pivotal role in Avery Dennison’s success today. One of my dad’s proudest moments during this period was receiving the 1986 Materials Group Cost Improvement Award for managing the Low Temperature Cure Silicone Project which saved $112,000 annually in raw materials and natural gas.

John Kmetz retired from Avery Dennison in 1999 after more than 40 years of service. He remained an active member of his community, and maintained connections with many of his Avery Dennison colleagues until his death in 2012. Our sincere thanks to Tim Kmetz for reaching out to ask us if we’d be interested in a few archive photos and memorabilia from his father’s collection. Thank you, Tim, for the honor of celebrating your father’s legacy.

Learn more about our company's history here.
Stay up-to-date on all the latest from Avery Dennison. Connect with us on Social Media.