"[The Sevilla police fleet] needed a more striking, highly visible reflective sheeting which could meet the highest standards of retroreflection and at the same time not be affected by rain or harsh environmental conditions."

The City Council of Sevilla presented newly decorated vehicles for the municipal police force in a spectacularly organized show. Blue strobes amidst purple lights and dramatic music set the stage for the dazzling presentation of the new fleet for the Police of Sevilla. Over 130 police vehicles—including motorcycles, cars and vans—were shining brightly with enhanced visibility and new branding thanks to Avery Dennison’s VisiFlex™ V-8000 prismatic film.

Previously branded with white and a red/blue checkerboard, new contracts and European directives demanded a change in appearance. Yellow and blue are now required for greater visibility and contrast, bearing a bold design reminiscent of London Police vehicles. The Seville police force were the first to switch to the new branding and the other local police fleets are expected to follow soon. To complete this project, they worked with J.P.P Electronica to convert the reflective material.

"They needed a more striking, highly visible reflective sheeting which could meet the highest standards of retroreflection and at the same time not be affected by rain or harsh environmental conditions,” says Miguel Lozano from Prismalite, the Avery Dennison distributor that selected VisiFlex™ V-8000 for the job. The microprism technology of this film is unique and provides the bold and bright film they were looking for as it is designed to be highly visible both in daylight and at night—a primary requirement for the police force. 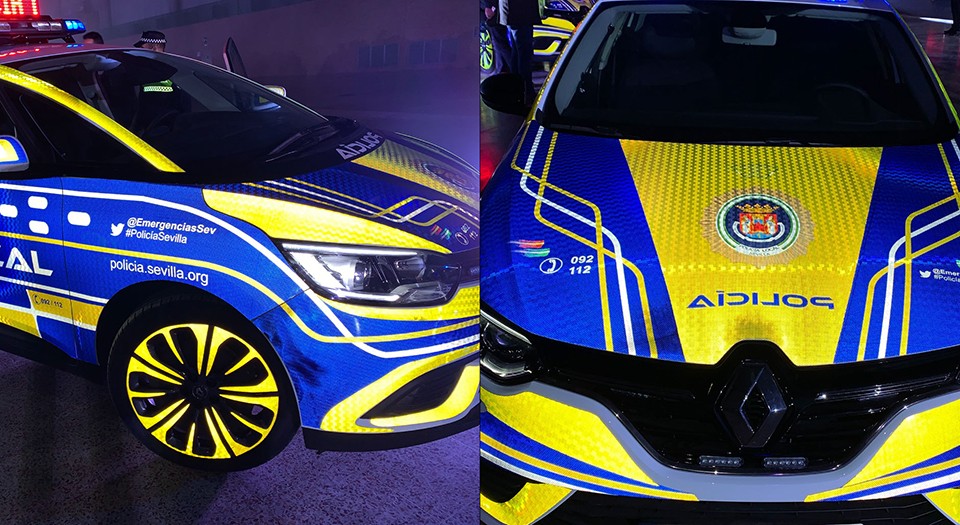 "The local police have demonstrated during this year their professionalism and their importance in the most difficult moments in the fight against the pandemic. Citizens and the entire municipal corporation recognize this work carried out. The new vehicles are a tool to reinforce their work and their presence in the city," says the mayor, Juan Espadas, who attended the presentation of the new vehicles together with the delegate of the Interior and Major Festivities, Juan Carlos Cabrera, and other representatives of the municipal corporation.

VisiFlex is quickly becoming the preferred reflective film for emergency vehicles that prioritize bold and bright vehicle appearance for conspicuity and safety. See how fleets around the world use Avery Dennison reflective films in the latest edition of the Global Vehicle Safety Showcase. When you’re ready, let us show what VisiFlex can do for your fleet by scheduling a consultation with any of our worldwide representatives and distributors.